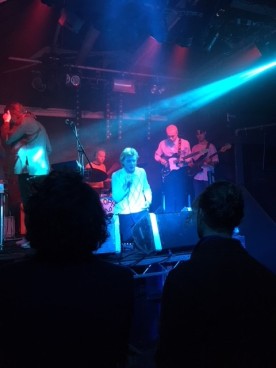 Went to see the Phobophobes for I think about the 7th time now. They were launching new single “Where is my owner”. Nice small venue in Elephant st just outside Elephant and Castle station. Phobophobes played a really strong set and they are one of the bands who  I have broken my three live shows and then move on rule over.They mix up a number of musical styles making them their own and have strong lyrical content. I believe Steve Lamacq commented on Radio 6 that  the latest single  could have been written by Nick Cave as a Christmas single. These guys deserve to be way bigger than they are but on the other hand like other music snobs I want to keep them as my guilty secret.

Support came in the shape of local band( I think) Famous who take the idea of anti fashion back to the likes of Mark .E .Smith. Tortured vocalist gave it his all against strong backing from the band. Like to see more of these guys to get a better opinion but they opened the evening really well with confidence and guts. With a diminished audience at that point I felt they did really engage the audience. One to watch for me at this stage.

Second support ,from Glasgow ,were The Ninth Wave who had travelled down that day. Interesting visually , main vocalist and lead guitar were very 1980’s , whereas the drummer and keyboard player had a current indie look.Not sure if this comment has any relevance but they almost looked like two bands from my perspective. I think they have a signed record deal and their sound shows some evidence of maturity. Female vocals were strong and complemented the male vocalist nicely on shared vocal duties . who do they sound like. a little like Pale Waves ,listening to them on Soundcloud . So you could say they do have the right mix of an indie attitude and commercial sound to get exposure .

In conclusion good night out. Good support bands and Phobophobes get stronger each time out.