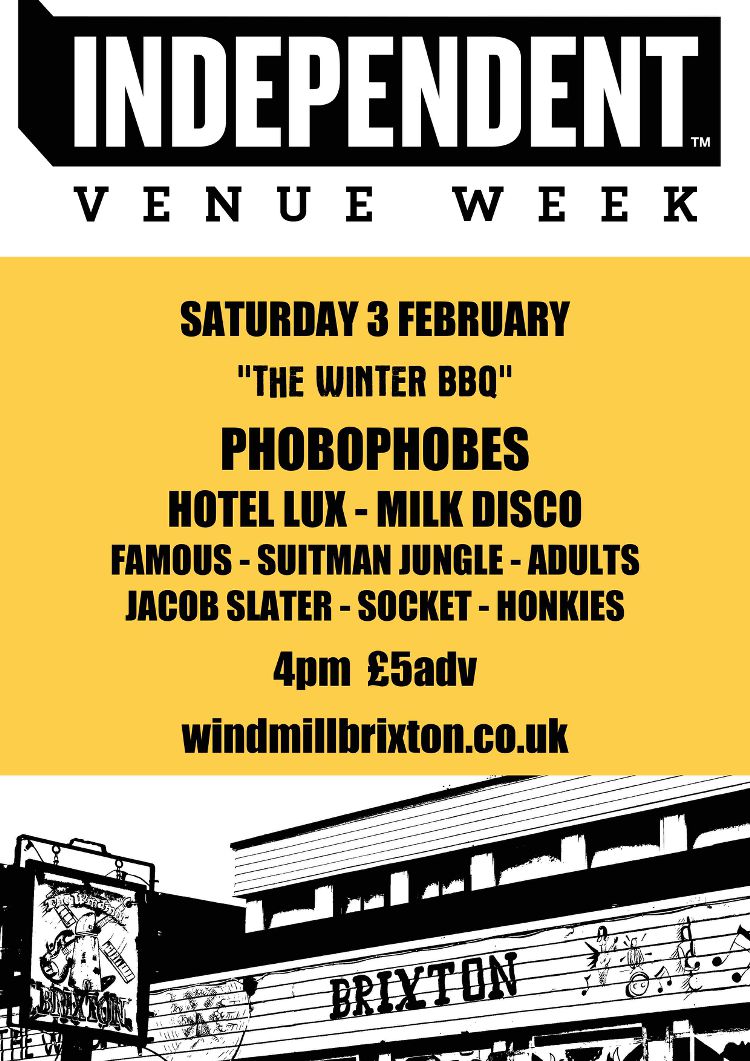 Went to the Windmill winter barbecue for another smorgasbord of indie bands and a burger all for £5.00 .All part of independent venue week which clearly needs to be supported. It was a rainy and cold pm so didn’t get there until about 4.45 –right in the middle of first set by the Honkies. Seen these guys before and they are getting a stronger more muscular sound I would say infused with keyboards drifting over the honky-tonk country-style that underpins their work.

Good opener they were followed by Cambridge based Socket, a band that are firmly in the post punk genre with short sharp songs  with abrasive female vocals. Whats not to like.

Change of pace with Adults who had a following  at the venue but whose songs were not massively memorable and more in the ballad singer /songwriter tradition. I sat this one out .

Interesting next band was Jacob Slaters latest incarnation. His previous band Dead Pretties , who I saw at the Moth Club last year took no prisoners and were great raucous live band. In contrast these guys were more indie middle of the road without the rough edges. They seemed to have a large active crowd element who knew his work (which I did not).

Next on the bill was Suitman jungle , who is  an interesting act. His alter ego is a jungle playing , social commentator dressed as the name implies in a very Marks and Spencer style suit. Crowd again appreciated his set. Ive seen him before and although his style has the potential to  be a bit Marmite one thing I liked is that he had a completely new set of tunes bar one I had heard before which I think was a bit o f a staple about travelling on the tube.

By now it was about 8.30 and I took an executive decision to see just one more band. Sounds like wimping out but the headliners, Phobophobes were not on until 11.30  which meant getting home about 1pm. Theres an ageist comment for you. I’m also seeing them in March at the 100  Club , which maybe a sign that they wont be playing these really small venues much longer.So just watched a band called Famous, who have elements of 70’s glam and synth ,fronted by a vocalist with his tank top tucked into his trousers. So a nice dose of anti fashion going on (which you can carry off in your teens /early 20’s). If I had followed suit I would have just looked like an old homeless person.

So it was a good afternoon / early evening. For anyone who has never ventured to this location I would say I always find it a good  non-threatening atmosphere although a bit of an awkward place to find on first try . Good range of beers and prices reasonable at £.4.50 a pint.