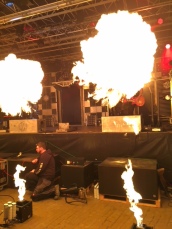 This was a very surreal evening. Having never been to a tribute act in my life I find myself in Europa Park in a place called Rust in Germany. The band entertaining the delegates are a German band who pay to tribute to Rammstein. Many people there thought they were actually the band. But they certainly did there best with some serious pyrotechnics throughout and a heavy sound. Not really loud enough to make the most of the genre however they played a ninety minute set which passed really quickly( so that has to be a testament to the entertainment factor and there ownership of the crowd) . I got right up to the barrier so hence some decent photos . Not much else to say on this one as a bit of a guilty secret in some ways. I wont tell anyone else I was there if you wont. Oh and the crowd surfing in the dinghy was inspired.