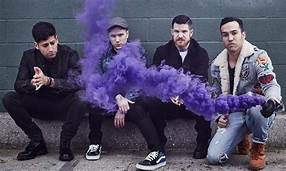 The O2 Arena is a venue I vowed never to visit again after seeing the Arctic Monkeys from row X  some years ago. But my current company had some VIP tickets so thought I would give it a go. Just for information if you get the chance the VIP experience is great. Minimal queuing and catered bar its a bit like the Heineken advert if they were to run venues. We had seating area and fridge included. However the location of the VIP boxes is a bit disappointing (they are between the two main seating tiers) as I don’t think it really gives you a better view of the stage than the cheap seats. Bit of a first world problem I guess.

Support was provided by MAX and Against the Current (who I am told are quite popular) who kind of came and went , did their best to create an atmosphere in the vast arena which was probably a third full for their sets.

Fall Out Boy came on at 9 and played for 90 minutes, starting on the main stage and then taking flight down the runway that ran the full length of the arena and then were raised into the air on two plinths until they were about 40 ft in the air. For those at the far end of the arena this was a nice touch in terms of trying to connect with the audience. Just a word on the crowd. A huge number of young girls in attendance ,the majority of whom could not have been the original pre-pubescent fan base but subsequent generations. This is testament to the continuing “emo” appeal of the band( they are partly acknowledged as being the pioneers of this genre I think) , although they are now all in  their late 30s and you would imagine don’t feel the same as they did in the their teens about its challenges.

Musically they majored on the new album with a smattering of early numbers and greatest hits (“This aint a scene , it’s an arms race”). Best reaction inevitably came from the old songs but as a casual observer the new songs are pretty much like the old songs! I have read some criticism in the past about the interplay between bassist and lead guitarist , Pete Wentz and  Patrick Stump respectively. Although Wentz takes most of the lead vocals and Stump was relegated to the mid song banter it seemed to work OK. Perhaps its shut up and take the money these days.

There were some stage antics and pyrotechnics but for my money the performance never really engaged the audience. Bang on 90 minutes they were gone. No shouts for an encore and as soon as the house lights came on the whole arena was pretty much cleared in 90 minutes.