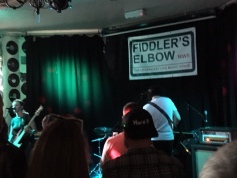 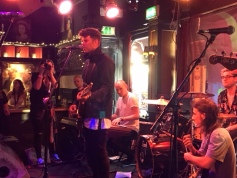 200 bands, playing 20 venues on one day is clearly a great feat of organisation and for the punter it’s a bit of a case of trying to see the wood from the trees when you don’t know most of the bands. I also didn’t want to search out people I had seen before and stay within my comfort zone. Mission accomplished on that front and it turned out to be a long but interesting day. I had researched maybe 50 bands plus as I wanted to get a bit of variety in my day out.

For the first band of the day we slipped into the Black Heart, as it was closest to the wrist band collection point and caught the last couple of songs from “Sulphur”. The Black Hearts upstairs room for anyone who hasn’t been is a claustrophobic low ceilinged room which if your at the back(as we were)  you get the occasional glimpse of the bands heads . “Sulphur” have all the rock and roll posturing you could want, suitably tattooed and had a strong following in attendance.

I had checked them out in advance and put a tick against them on my itinerary. Growling vocals and thrashing guitars against fast tempo drums they epitomise heavy rock in the current decade. Some nice melodies run across the top avoiding it all sounding one paced. Good start to the day.

The strategy deployed on the day was to get to some of the more far flung venues as Camden was packed around the station and larger venues on a lovely sunny day.

In following this strategy the next stop was a nod to nostalgia as we went to see “Echobelly” at Fest Camden. I did buy their greatest hits Cd at some point in the past so had a little view on the archetypal mid 90s brit pop they produced. The Fest is a reasonable venue with pretty good visibility from most areas as the auditorium is stepped up to the seating that borders the auditorium at the back.

There was a bit of prima donna behaviour trying to get the sound right which meant they came on 10-15 mins late. Stayed for approximately half the set (as they were down for 75mins) which was too much unless you really love the band and they have some quality material to rely on.”Echobelly” were promoting new album (why we ask?) as well as harking back to the past. The audience was predominantly the audience from the 90s’but with less hair and possibly the curious like me. The first couple of songs were ironically spoilt by lack of vocals. I spotted a couple of crowd pleasers amongst the songs but overall they were acting like the headliners when they were way down the running order. They certainly sound like a band that has been successful but the current revival is probably most appreciated by the die-hard fans reliving their youth.

As we had left early we continued to head north to Chalk Farm and approached the relative tranquillity of “The Fiddlers Elbow”. I like this pub and its intimate atmosphere is ideal for seeing smaller bands. You can even sit down which after two full on busy sets was great. First band were “Muffin Heads”, who had a god following in tow. They were good. A three piece with main vocals supplied by the diminutive bass player, she controls proceedings, with a growl in her vocal delivery. Although firmly in the heavy genre there songs do display individuality and varying textures and not just a full frontal assault. Still a relatively unknown (?) band and obviously on the rise so go and see them.

“This Boys Fire” were next at the” Fiddlers Elbow” as we decided to stick around. The previous crowd for the” Muffin Heads “had gone (did they know something?). So by the time the guys hit the stage they were playing to about 20 people. I would probably call them more melodic rock. My immediate thoughts were Biffy Clyro sounding. They gave it 100% and didn’t let the fact the audience was a little thin divert from delivering a set of tight songs with good variety. Their Facebook page indicates a couple of line-up changes over the past two/three years and a bit of a re-launch. Like all bands they need a bit of luck to get that break since they sounded as good as anything I saw all day. As I’ve said many times in my reviews good song writing and structure isn’t enough to get you noticed? I’ve listened to them on YouTube to get a fuller view on their sound. Got some good songs and a nice sound with catchy choruses and melodies. As a non-expert of this type of music I don’t know where they sit in the pecking order but I would certainly pay good money to see them again.

Next up and last band at “Fiddlers” before we headed back out into the real world. They came with their own entourage. I think these guys are well thought of. My view was that they played a more American style of rock in the vein of Guns and Roses or someone like the “Band of Skulls”. A few guitar solos thrown in. Songs like “Thunder Child” and “Living the Dream” are undeniably catchy. You don’t need to think too much but you can just rock out.

And now for something completely different.

Headed down to the” Monarch” on a long sweep back into the main hub of the event. “Longy” are from Essex and have an element of TOWIE and cheeky cockney chap about them. Musically difficult to pigeon hole. Let’s assume they are on the rockier side of the spectrum but lyrics and melody are too the fore here with the addition of a horn section and acoustic guitar for punctuation making the sound a mature and multi layered affair. I’m thinking they are closer to the “Maccabees” brand of observational songs sung with earnest emotion rather than full on rockers. Listen to “Tape Up” or “Positively employed”.

Next on the itinerary after a fuel stop at a great Thai restaurant “Lan Kwai Fong”, opposite the Camden Stables area, we headed for “Dingwalls “to see the” Urban Voodoo Machine”. Definitely a good time band they mix up rockabilly , punk , blues and folk with some visual and musical theatricality .It’s obvious they like to dress up and  they created immediate rapport with the audience, many who clearly seen them before. Obvious comparison with bands like “Gogol Bordello” (they didn’t appear happy about that) and” Mariachi El Bronx”. Didn’t stay for whole set as the day is a bit about hopping around to try and capture as many bands as you can. But I will be doing a bit more research on these guys and would like to see them again.

Headed directly across to Electric Ballroom for” PIL”. It had been a bit of a toss-up between PIL, “Maximo Park” and “British Sea Power”, in terms of which headliner to watch, but in the spirit of seeing someone you hadn’t seen before” PIL” won out. To put it in context I had bought the first two albums back in the day. Although it sounds like the “Sex pistols” to my ear now at the time the single “Public Image” sounded really novel with its echo in the production. Getting on my hobby horse I was also concerned about the nostalgia element having not seen Mr. Lydon live before. From the off you get the impression that his stage persona is both to extremely seriously and at the same time not at all serious. . John Lydon made an interesting comment at the outset of the performance about how everything was getting wider (a reference to his waist it would seem).

For me it took a little time for the set to warm up but a good sign was that the first 40 minutes passed in a flash. The set was obviously a mixture of songs old and very old. “Flowers of Romance and “This is not a love song” sounded both of quite retro and really good live whilst biggest audience reaction was for “Rise”. Main set was about 70 minutes and then after a quick fag break they were back to continue “to break the curfew” (JL).

Have to say I was won over. At the age of 62 he seemed to really be enjoying himself. He remains an interesting character being responsible for two epiphany moments in popular music (or at least he was there even if not fully the Svengali). I did read ironically that he was mooted to be on the honours list for an MBE for services to the music industry.

So that was the day. A bit random but I knew that even if I had a firm itinerary it would get subverted at some point. By spending a couple of hours off the main grid and then a bit of food managed to survive a near 10 hour outing which was an achievement in itself for a Fat White Old Bloke. So looking forward to next year and maybe getting slightly challenged again by listening to some new stuff.