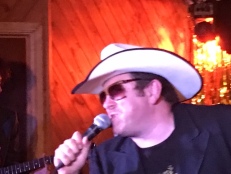 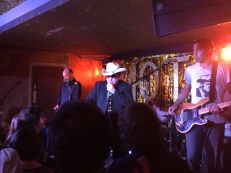 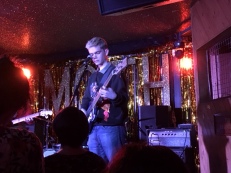 “Warmduscher bring a fresh approach to garage rock, with off-kilter electronics, audacious guitar lights and cowboy hats. In cahoots with GSHB, they turn indie into an exciting prospect – they’re sturdy reassurance that guitar music doesn’t have to be a derivate snooze fest.” – The Quietus.

I was anticipating a good night at the Moth Club having seen both support band “Black Midi” and “Warmduscher” before. The Show was for the recently released second album “Whale City”. I’ve listened to this a few times in terms of doing some homework for the gig and it could be seen a s a concept album, anchored to the fictional “Whale city” with vignettes about its various occupants. Immediate reaction was its slightly more accessible and less experimental than the first album “Khaki Tears”.

The sound has developed but not moved fundamentally in a new direction so will cement their following rather than taking a huge risk. Eleven songs in 28 minutes demonstrates that there are plenty of ideas but none of the tracks outstay their welcome by becoming indulgent. In fact maybe the plan is to tease the listener to be baying for more.
On the night the live performance was prefaced by a voice over from Dr .Alan Goldfarb describing how he had met the band back in 1974. Listening to the album and looking at the hype surrounding the band including the graphics I would say they have created the audio equivalent of a “Grand Theft Auto” with a world of drugs, pimps and violence.
So with the back story established the band hit the stage. In the live format they majored on the more up-tempo numbers from the second album and then dipped into the first. Songs such as “Salamander”, “Big Wilma” and” I’ve got friends” were huge. Tempo slightly slowed for “1000 whispers” and then at the end of the set they announced they had two songs left, preceded to play one and then walked off until someone reminded them they had a final song to play at which point they returned to complete. It was a touching moment. Taking a brief interlude from discussing” Warmduscher” the evening also included two support bands.

Support was provided by “Muck spreader” and” Black Midi”. “Muck spreader” were a bit of a mini-“Warmduscher”, still working on their style and sound. Vague and at sometimes invented vocabulary, liberally sprinkled, punctuated a funky musical backdrop with what sounded like a few reggae rhythms and dub here and there. Not taking themselves too seriously they were solid enough and a good opener, although the audience was a bit thin at this point.
Intrigued to see Black Midi again as I saw them back in April supporting Shame. They have grown up ,not physically (still all look like teenagers) but musically. They certainly come to the creative experience wanting to be recognized for their musicality and musicianship. They must be continually practicing and not engaging in the rock and roll lifestyle as they were as tight as a band. As a counterpoint to the headliners who I would suggest come from a slightly different creative direction it was quite interesting to witness the two styles on the same bill. The drummer is outstanding and did dominate the sound a little on the night but their somewhat “progressive” sound didn’t come over as to overworked and indulgent. In terms of information about this band they have kept a low social media profile.
In terms of looking for influences they have elements of Talking Heads, the quirkiness in parts of XTC and slightly more contemporary smatterings of Dutch Uncles, particularly with reference to the lead vocals which have an awkwardness but also a matured assurance that made the indiscernible lyrics appear relevant. I certainly felt that they had changed from where they were even two months ago.

They have some long songs in their set but managed to keep them fresh by bringing any musical meanderings back to the original simple opening riff. Very impressive and I did fear a little for the headliners as this could have been one of those occasion where the support blows them away.

They sound like a band that has been playing together for 10 years yet still have youth on their side. An interesting band to watch and maybe say “of course I was there at the start you know”.

But back to the headliners and any thoughts that baby was going to be put in the corner were soon dispelled. The audience certainly in the first third reacted with enthusiasm as the temperature started to rise. They were as good as the first time I saw them back in November at the Coronet. Constant touring has not knocked off the rough edges yet, which is great.

They have retained a level of sleaze and scuzzy rhythms which in my view are the signature of the vibrant South London music scene. When looking back in a few years the discordant, angular guitar riffs (with country and honky tonk influences) will be seen as characteristic of this period. Think of Fat White Family, Phobophobes, Goat Girl, Honkies and a good few more.
Comparisons with Fat white Family are obvious, with original drummer and guitarist both coming from those roots. But although you can hear these influences references to disco and soul from the 1970’s makes this a clever band. They have delved into a different inspirational pool and stream of consciousness.
The lead singer is a larger than life character with a larger than life hat and 70’s retro shades. He encouraged and goaded the crowd whilst mixing narration and singing throughout the set.

The whole evening was an affirmation of the wisdom of seeking out newer bands if you want a real musical fix, rather than watching bands in vast and vacuous spaces where the connection between audience and artist is seriously diluted.
The venue is also one of my favorites. Even when sold out you can usually get a reasonable view from the back or mid-auditorium and not just a view of people’s heads. The bar although small is well staffed by efficient and well trained staff.

The whole package epitomizes the genre of rock and roll at its best- sweaty, edgy, beery and fun. Let’s do it again.