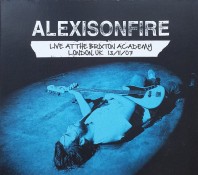 Moving towards the heavier musical musings on this night out. I’ve seen a few similar bands such as “Bullet for my Valentine” and “Editors” at this venue. The night could easily be characterised by the abundance of beards, beer bellies, large quantities of beer and tattoos. Add in lots of band t-shirts and a huge scrum for new merch in the foyer and you get the overall picture.

One of the major problems of this venue can be the equality of the sound in Brixton. “The Libertines” last year for example was quite disappointing and “Frank Carter” of “Rattlesnakes” fame sounded like he was singing from the room next door. Getting into the venue can also be slow, particularly when the crowd has turned out for the early supports, as they seemed to have done on this occasion.

I’ve been to Brixton O2 many times but never sat in the gallery so this was a first and made for a different perspective. As you can see into the rear of the stage but can’t see the audience from the front few seated rows it’s quite interesting as you are not seeing the normal eye level view when in the standing area. So first impression is how little of the stage the band occupies but positive aspect is that you can see the bands in all their glory.

First support were Gold Key who are made up of ex-members of Gallows and Blackhole.
“The new project consists of Gallows and Krokodil guitarist Laurent Barnard, Sikth and Krokodil bassist James Leach, Blackhole drummer Jack Kenny and Spy Catcher frontman Steve Sears on vocal and guitar duties”.
https://www.loudersound.com/news/gallows-sikth-members-in-new-band-gold-key

Not as hard-core as the Gallows sound but still spokesmen for the Watford DIY scene. Live they are a guitar band but with some elements of keyboards in their recorded work (please refer to YouTube). The vocalist has quite a high register in his voice which sounds a bit more contemporary than the standard roaring and growling epitomised by this genre of music. Lets say it’s a more grown up sound and not completely born out of rage and frustration. Still what many would probably regard as not “radio friendly”.

Second support were “Cancer Bats”, from Ontario, who had amassed a reasonable entourage it seemed. They played a lot of older stuff, although they said a new album was released called “The Spark That Moves” I was told they have actually spent the last few years touring old Black Sabbath tunes as a cover band called “Bat Sabbath”.

They were high energy as you would expect but I couldn’t make out any songs, as hadn’t done sufficient homework on this night out. Growling, prowling vocals over hard-core and punk guitar work. As mentioned before they were welcomed with affection by the audience.

Headliners Alexis on fire came on approx. 9.20 (the turnarounds had been reasonably short.

To my ear they sound vocally a little like “We are the ocean “(now deceased) and they have that same melodic song writing technique, with two vocalists one of whom provides the harmonies whilst the other punctuates with a more throaty growl. They refer to this as a clean vocalist and a dirty vocalist. Maybe that’s the correct term for those in the know.

The audience had obviously come for this and one interesting visual focus, drawing my attention from the bouncing band members on stage was a constant stream of crowd surfers who were plucked from the front of the crowd and liberated into the wings. The security staff were actually finding it physically quite punishing, as it was relentless from the start.

The band were energized and gave a good show. They are still in a reunion phase since 2015 after splitting “not amicably “ in the early part of the decade. Clearly being in a band for 10 years plus creates all sorts of tension and vocalist Dallas Green (dirty vocals) appears to be the catalyst for the split.

The hair is shorter and the on stage energy probably not as frantic as when they were in their 20’s but they pack a punch and were well rehearsed , giving the fans what they came for .

With the current weather in the UK it was a hot and sweaty night even in the balcony.

This post hardcore scene is embedded in the majority of the audiences DNA as I’m sure the majority spent many evening in the splendid isolation of their bedrooms learning all the lyrics. I can only view slightly more dispassionately, note some of the inevitable clichés and move on. One refreshing aspect for me is that between songs they did go to some lengths to state that there concerts were a safe space and they would not tolerate homophobia, misogyny or racism. I think that’s a nice gesture as the commonly held view of the general public about such bands is that they are fostering anarchy and violence, and just not “nice” people.

I tend to find that the crowds for these kinds of bands are generally good natured and there for a good time.

As it was a school night and my third night out in four decided to bale before the encore. Good to hear different music and I know my musical taste has veered slightly in this direction the last 18 months. Time to work out what next.