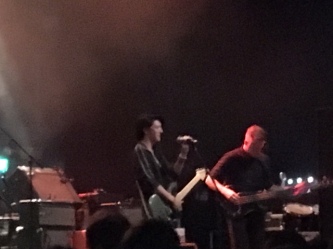 This is a late review as I was a slightly uncomfortable about if I really wanted to post on this event.

I first saw BRMC at the O2 Kentish town some 10 – 15 years ago, although almost missed them as overran in a nearby pub. So it was almost like coming full circle to see them again at the same venue. The night of the 26th July was a seriously hot evening to the point where the fire doors were left open to get some respite from the 30 degree plus heat.

Support was provided by Queen Kwong who are a straight forward rock band, with a scuzzy guitar sound which compliments BRMC , and they ended with a few rock and roll histrionics as they walked off stage at the end.

Maybe it was the heat or the general boozy overload on a Thursday evening and the fact that it was really shoulder to shoulder at the Forum but I wasn’t massively excited by them and it didn’t encourage me to explore further. All down to taste in the end and where you have come from musically which informs your sensibilities.

BRMC hit the stage at 8.30 and the assumption was a long set was imminent. They played songs from the latest album “Wrong Creatures” initially and then plundered their back catalogue at will (I hadn’t realised they are now up to eight albums so I only have access to four).

About half way through the set I abandoned the project as they meandered into some acoustic numbers and away from the hypnotic guitar riffing that in my opinion is the trademark sound that I went to hear. Appreciate they may want to move on and looking at the audience a fair proportion new the latest album well.

So not to detract from the fact they always give real good value for money, playing 90 minutes plus, I just didn’t feel any vital spark from these guys. 20 years into their career at this point with some great work as their legacy it felt like they were going through the motions.

I’m sure many who were there would disagree with this synopsis and cry heresy but I would prefer to see 30 minutes of full on energy with the crowd baying for more than a 25 song set which in a way is like a history tour rather than a statement of intent.

This is a text widget. The Text Widget allows you to add text or HTML to your sidebar. You can use a text widget to display text, links, images, HTML, or a combination of these. Edit them in the Widget section of the Customizer.
Loading Comments...
Comment
×
%d bloggers like this: