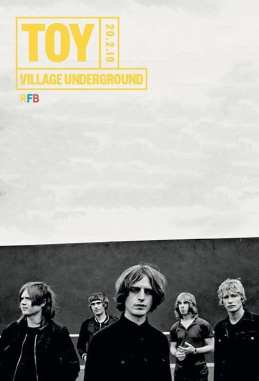 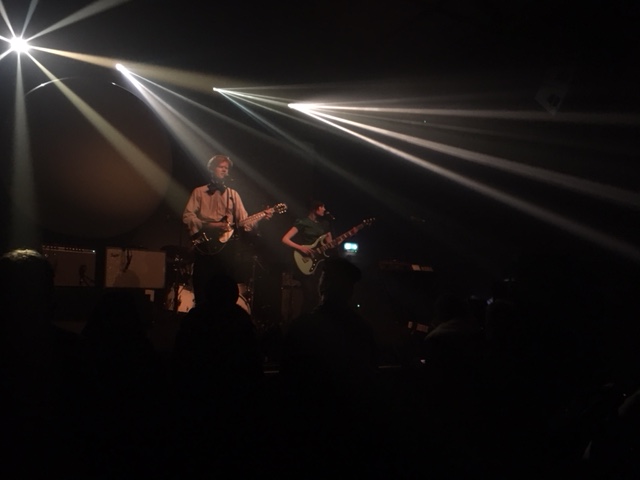 Took a visit to the Village Underground near Liverpool st station to see “Toy” as they have just launched what is there fourth album. The audience was suitably shoe gazey and “Toy” are one of those bands that I expected great things from a few years ago when I first saw them. I really liked there first two albums and used to play them in the car repeatedly.

They opened there set with a few new songs as far as I could tell form my strategic position near the sound desk (assumed this might be the best sound). In the live setting when they rock out and let’s be honest this band are very much in the tradition of the prog rock bands of the early 70’s they sound a little like Status Quo. Depending on your persuasion that’s obviously good or bad. I just found that on the night they didn’t really elevate their music to any new height that really thrilled me.

I had arrived early as per usual to check out the support. First band called “The Shadracks” consisted of female bassist and drummer and male vocalist/guitarist. I mention this because it’s a bit of a trend it seems. Does it add a different dynamic I don’t know? But on reflection a few of my favourite bassists in current bands do seem to be women. Thinking of “Future of the Left” or “Savages” for example.

Anyway they played multiple short songs in the 2 minute to 2.30 range. Some worked, some needed more work and they genuinely seemed to be trying stuff out. The singer both visually and delivery wise reminded me of Bowie back in his early London Boys days, a bit of a cheeky ,cockney chappie vibe. This comparison might clearly be a bit over the top but interesting all the same. Referring to their Facebook page it looks like their mission is to turn the clock back 40 years. I think they were close to accomplishing that.

The most notable aspect of their set was a cover of “Alternative TV’s” song “Splitting in Two”. It was there last and best song but I am intrigued at the choice. Clearly not random and it prompted me to go back and listen to the original album, which was a pretty random collection of songs 40 years ago.

It has left me wanting to know a bit more so probably did its job.

Second support was “Adrena, Adrena” which is a collaboration of visual artist Daisy Dickinson and drummer E-Da Kazuhisa. I was happy to indulge their musings for 30 minutes and it consisted of some synth rhythms, what has to be regarded as rock solid drumming (without being over indulgent) and someone manipulating images on an 8ft diameter circular orb from their laptop.

It was hypnotic and engaging and kind of therapeutic as it washed over you. It was worth seeing/hearing but not something I would enthusiastically seek out.

The evening was therefore quite an eclectic mix and it wasn’t clear if this was a curated effort or just a random coming together of various talents.

An aspect that I really enjoyed on the evening was the DJ, Rhys Webb, who provided the music between the acts. He played a vast array of DUB music, which I haven’t heard for probably 40 years in any quantity. Sounded great on the PA in the venue and really took me back in time. It also provided a real laid back feel to the whole evening. Really enjoyable.

Overall an eclectic mix of artists and a nice feel to the whole evening. Drinking at the Village Underground is not hugely recommended as its limited to a few brands in 330ml cans at £4.80 a pop. My recommendation is therefore to embrace the atmosphere but do your drinking elsewhere if you really need to.