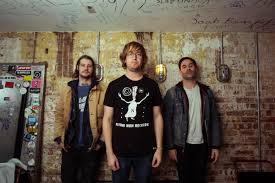 This was a new venue for me and as it was interesting I’ve taken a picture to give you context. Studio 9294 is an industrial unit close to Hackney Wick Overground station and the Olympic village at Stratford with a small bar tucked in the corner and interesting toilets perched on a makeshift mezzanine level. It’s not a polished venue (except for the concrete floors) and all the better for it I would say. Sound quality was good throughout

A barmy night weather wise as we wilt in the heat the area around Studio 9294 is entertainment central in this part of Hackney with a few other trendy and hipster playgrounds in evidence in adjoining units.

I had wanted to see” Metz” for a couple of years so jumped at the chance to get tickets. It’s a small venue and I thought there audience pull would have been greater but it was packed and several hundred people got sweaty together.

The support was provided by “USA Nails” and “Feels”. “USA nails” were very loud and certainly ideal opener in terms of complimenting the noise/punk/hard-core theme of the evening. I took a quick trip to the front to take a photo and was deafened as I walked past the speakers. They played 40 minutes possible saving there melodic offerings to the last few songs. All band members collaborate in other bands and they are undoubtedly slick and professional.

Second support were Californian band “Feels”. A predominantly female line up them did lose the attention of some of the audience as they are more garage band with a few reggae inspired numbers. Big bass lines held the songs together and they seemed to enjoy themselves. As always in a different setting and context these guys were potential headliners and I did wonder what they would have thought of the slightly unglamorous venue and surrounding environment.

I hadn’t researched either support so my comments are on an initial listen.

With little fuss “Metz” entered the arena and then proceeded to do exactly what it says on the tin. With a suitable frenetic light show, which complimented and accelerated the feeling of darkness that permeates their music, they powered effortlessly trough 45 minutes of what some would say is controlled noise. Of the songs I managed to recognise there were a number off the latest album “Strange Peace”.  These included “mess of wires”, “Drained Lake” and “Cellophane”.

Arguably more controlled and less raw than earlier numbers it was a righteous attack on the senses. And then as calmly as they had arrived they were gone and the house lights returned. Most people left ears ringing in their skulls but satisfied I would imagine.

It was a good night and I had meant to take ear plugs on this occasion. Can’t believe they couldn’t fill a bigger venue but as they are Toronto based I assume they don’t get to the UK too much.