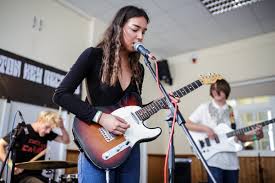 Bank holiday trip to the Moth Club, Hackney. A venue only recently discovered by me it always produces a good atmosphere. Hot and sweaty the gold lame covered curved roof and stage back drop of gold tinsel (?) is somewhat at odds with the militaria that adorns the walls of this ex-Service men’s club.

A torrential downpour prefaced the start of the show as people scrambled to get in. Being a Bank holiday a fair proportion of the audience were ready for a singalong with the PA system well before anyone had stepped on the stage.

Support act were the Mysterines who play good old basic blues based rock. A three piece they have youth on their side and a strong female vocalist who really belts out the songs which is probably the best way to describe it her vocal style. They played 20-25 minutes and I think its fair to say they are still experimenting with song structure as a number of tracks seemed to build to a level and when they were chugging along at full throttle they brought the song to an abrupt end. It was almost like they felt that 2 minutes or 2 minutes 30 was the optimum they could expect the audience to concentrate.

They are tipped for great things and surely it will be fortuitous to be supporting someone like Miles Kane and getting such exposure (pretty sure they are support for the whole Coup De Grace tour). As mentioned they are a young band so all to play for. I particularly liked the very muscular base sound they produced live (reminiscent of early Stranglers) backed by some fast and furious drumming. Vocals were strong and mid-range, so not what my better half refers to as “whiny “female vocals.

9.15 and Miles Kane takes to the stage. A confession to start. I wouldn’t have bought tickets to see him except that I knew it would be the most intimate Venue that you’re ever likely to see him live. So fair play to him as well for making the effort to get to smaller venues (he was playing a second night at the Moth club)

I wanted to see him perform his solo stuff (not so interested in Last Shadow puppets,) and he didn’t disappoint. Apart from promoting the new material from his forthcoming album he majored on the solo albums”Don’t forget who you are” and “Colour of the trap”. As you can see from the set list below the highlights from both albums were on display here.

Apart from one false start (starting in the wrong key) the songs were tight and delivered with huge energy (even the older stuff). Sometimes bands tend to race through the old stuff in my opinion. He did seem pleased to be there and the front of the crowd responded accordingly. It was hot and steamy at the front ( I spent half of my time  right at the back and then the last half of the set about two rows from the front) Front was better from a sound perspective and it was engagingly loud without making your ears bleed.

The crowd demographic was also interesting. A smattering of young mod types, many with girlfriends, on a couples evening? There was also an element of laddish wanna be football hooligan, unfortunately from the Fat white old blokes demographic. It reminded me a little of Charlatans or Kasabian gigs in this respect. I can see the attraction from the singalong choruses and the Mod musical underpinnings but interested to understand where the gateway for these fans was- did they come via the Artic Monkeys / Shadow Puppets connection? It was certainly also a little incongruous seeing the crowd chanting what could be argued are some sensitive lyrics about love lost and emotional turmoil.

In conclusion a good show, a great venue and two good bands with great pedigree. Although not a die-hard fan I am looking forward to the new album as the samples on offer appeared to build on what’s gone before.