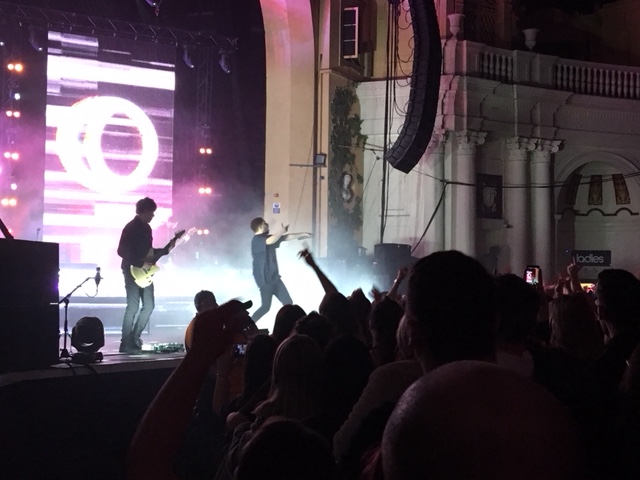 Had a good night out at Brixton Academy. Officially sold out the O2 was busy but not absolutely heaving. The crowd was pretty good natured and of a younger demographic, I think the main concert goer here was predominantly female and reliving their early teenage crush for the guys in “You Me At Six”.

Not a band I’ve ever listened to I was there on free ticket courtesy of one of my son’s girlfriends who was a fan of the lead singer, Josh, back in the day.

Support was delivered by” Xcert”, (on their fourth album) who hail from Scotland I believe, were competent and rocky enough to get the early crowd on their side and clapping along.

Second support were the mighty “Marmozets” who powered through a 30 minute set but I felt were let down a bit by the quality of the PA. Curse of Brixton I think that has seriously afflicted a few bands I have seen there before at this venue.

Headliners came on at 9.15, had a stepped, extravagantly backlit  and clearly very expensive stage set , and just launched into song after song which by the audience reaction were all what they had come to see. First song “Fast Forward” is probably the most energetic track both lyrically and musically on the latest album. The band are a bit heavier in the live setting compared to their recording style, although the latest album “VI”  sees them moving into more pop territory and experimenting with a new sound in general. Perhaps the pains of growing old or search for larger audiences. Always difficult to know if this will be a springboard to new fans or a turn off for the old fans fuelled by nostalgia.

Again although being predominantly millennial there were some obvious teenagers in the crowd so possibly they have manged to cross over generations.

As mentioned they did stop for a few words occasionally but for 90 minutes they ploughed on. Not having listened to the back catalogue before the gig it was difficult to say if there were any real stand out numbers but everything on offer was gratefully accepted by the audience and I just let it wash over me and get absorbed. They did remind me of a boy band that had been infused with a heavier vibe and I would say despite being English they are in the vein of “Fall out Boy” and associated acts but without the same overblown melodic hooks in their songs. Perhaps again a good thing for longevity as their songs are slightly more subtle.

They are obviously currently popular as they have added a third date at Brixton due to demand.

They played songs from all six albums but only one from the Anniversary album“Take off your Colours “which may have been different from other nights on the tour but I think it was well curated and the different styles of album merged seamlessly on the night. Good time had by all that attended I would say.